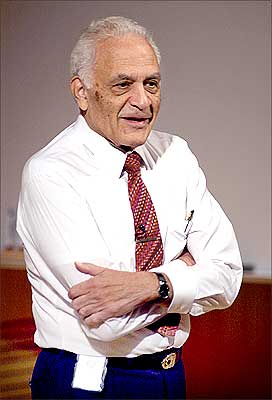 Amar Gopal Bose (Bengali: অমর গোপাল বসু Amar Gopal Boshu) (born November 2, 1929) is the chairman and founder of Bose Corporation. An American electrical engineer of Indian-Bengali descent, he was listed on the 2007 Forbes 400 with a net worth of $1.8 billion.

The child of an Indian-Bengali father and white American mother, Bose was born and raised in Philadelphia, Pennsylvania. His father, Noni Gopal Bose, was an Indian freedom revolutionary from Bengal who having been imprisoned for his political activities, fled Kolkata (Calcutta) in the 1920s in order to avoid further prosecution by the British colonial police.

Amar Bose first displayed his entrepreneurial skills and his interest in electronics at age thirteen, when, during the World War-II years, he enlisted school friends as co-workers in a small home business repairing model trains and home radios, to supplement his family's income.

Bose graduated from Abington Senior High School and entered the Massachusetts Institute of Technology, graduating with a BS in Electrical Engineering in the early 1950s. Bose spent a year in Eindhoven, Netherlands, in the research labs at NV Philips Electronics and a year in Delhi, India, as a Fulbright student where he met his future wife, Prema, from whom he is now divorced (he has now re-married). He completed his Ph.D. in electrical engineering from MIT, writing a highly mathematical thesis on non-linear systems.

Following graduation, Bose took a position at MIT as an Assistant Professor. He focused his research on acoustics, leading him to invent a stereo loudspeaker that would reproduce, in a domestic setting, the dominantly reflected sound field that characterizes the listening space of the audience in a concert hall.
Bose was awarded significant patents in two fields which, to this day, are important to the Bose Corporation. These patents were in the area of loud speaker design and non-linear, two-state modulated, Class-D, power processing.

To found his company in 1964, for initial capital, he turned to angel investors including his MIT thesis advisor and professor, Dr. Y. W. Lee (who invested his life savings on the effort.

During his early years as a professor, Bose bought a high-end stereo speaker system in 1956 and was reportedly underwhelmed by the performance of his purchase. This would eventually pave the way for his extensive speaker technology research, concentrating on key weaknesses in the high-end speaker systems available during Bose's time, and focusing on psychoacoustics, which would become a hallmark of the company's audio products. Applying similar psychoacoustic principles to headphone technology, Bose created the Tri-Port Earcup Drivers." Today, the Bose Corporation is a multifaceted entity with more than 12,000 employees, worldwide, that produces products for home, car, and professional audio, as well as conducts basic research in acoustics, automotive systems, and other fields.

Bose Corporation, as a privately held company, does not publish its financial numbers, however a few hundred shareholders do receive audited annual financial statements.

In addition to running his company, Bose remained a professor at MIT until 2000.